A Most Fantastic Tragedy

The year was 1997. For Brian “Legs” Hamilton and his friends, it was the summer that followed graduation from college, the summer before life as an adult actually began back when they were still invincible. It became the summer when anything that might have remained innocent in their lives came to an abrupt end.

Legs and his friends embark upon one last road trip before they must face the real world. They set their sites on rafting amidst the canyons of the Rio Grande River along the Mexican border as their final chaotic drug-fueled exploit. A five-day adventure that was supposed to be the best time in these young men’s lives ends as a nightmare that will haunt them forever. We all love our friends. We think we know them, and we think we know ourselves. Sometimes, though, circumstances spiral out of control, and life forces us to confront who we are and whom we’ve surrounded ourselves with.

Hubris Falls is a fast-paced, darkly comic tale of a group of men on their final, drug-fueled bender before adulthood who are trying to find their way but are finding only the harshness and tragedy of life instead.

Baseball Dads is a pitch black comedy in which one man takes on the duty of bludgeoning honor back into a sometimes dishonorable world.

Dwayne Devero is just like you and me, except he simply doesn’t give a s**t any more. He’s had enough. He’s done with people living life wrong. You’ll do it right, or he’ll bury you under the bases at the ballpark where he coaches. It’s just that simple.

Tired of poor decisions being made all around him, from the politics of player positions on his son’s little league baseball team to the philandering of his wife in his own bedroom, Dwayne decides that breaking is better than bending. What follows is a wild ride full of carnage and revenge, led by a man who will stop at absolutely nothing to bring honor back to his family, his community . . . and children’s baseball. 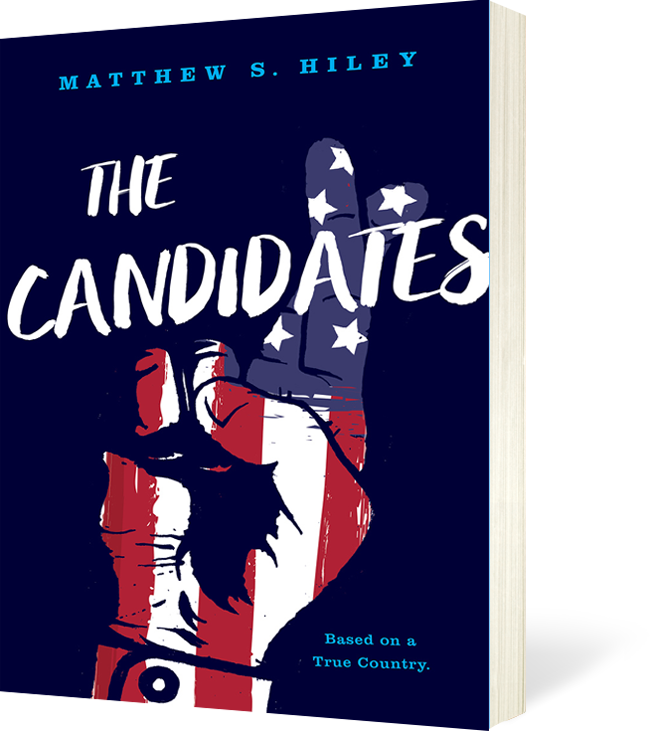 Skip LaDouche and Harry Pinko are the two front-runners campaigning for the Presidency of the United States.

They are what we’ve come to expect from our leaders: self-serving and unqualified. When Kimmy Faimwhorre, the reality star they are both having an affair with, turns up murdered, the candidates take campaigning to its most primal form- the complete and total destruction of the opposition. Nothing is sacred in this violently comic novel from Matthew S. Hiley. Politics and pop-culture are thoroughly skewered in one of the most absurd and entertaining stories ever told.